Celebrate the Cincinnati Bengals road to the Big Game and incrediable season with these “Who Dey” Bengals orange flavored pudding shots. Perfect for tailgating or your Super Bowl party.

Okay I have been a longgggg suffering Cincinnati Bengals fan for the last 40 years. I was a teenager the last time the Bengals went to the Super Bowl but they have never won the Big Game. Last year we knew we had something special when they drafted Joe Burrow, but as fans we were afraid he would become “Bengalized”.

He almost did last season when he tore up his knee after six games. But how the tide has turned for the Bengals and the fans. We are actually in the Super Bowl. Hard to believe and if they win Cincinnati will go crazy.

I have always been known for my pudding shots so when the Bengals made the playoffs I decide to creat these “WHO DEY” Bengals Pudding Shots. We decided that each time the Bengals scored everyone would take a shot. I have ran out twice.

Well, it worked and the Bengals are going up against the Rams in the Big Game this Sunday. To keep the good vibes going I made 70 “WHO DEY” Bengals Pudding Shots for the Super Bowl. Go Bengals!!

How To make “WHO DEY” Bengals Pudding Shots

Pudding shots are easy to make and are very versatile. For this recipe I use vanilla pudding and orange flavored liqueur. The shots are not overly strong and you would need to eat a lot to show any effects but I am hoping the Bengals score so many times that everyone gets a little tipsy. These “WHO DEY” Bengals Pudding Shots would also be great for Halloween.

Add dry pudding mix, milk and alcohol in a large bowl. Beat with a hand mixer or whisk for 3 minutes. Mix in cool whip and orange food coloring (equal drops red and yellow food coloring mixed in a small bowl) too desired color.

Refrigerate pudding for at least a 1/2 to allow to set up. Place pudding in a gallon plastic bag and snip the end. Arrange 35 2oz. pudding cups on a sheet pan and pipe pudding equally into each cup.

Top each cup with a dollop of whipped cream.

Top each with orange and black sprinkles. Place on lids and freeze until ready to serve. These will last in the freezer for months. I buy the cups, lids and little spoons from Gordon Food Services.

Let’s Go Bengals and bring the Lombardi Trophy back to the Queen City. WHO DEY! 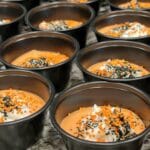 Celebrate the Cincinnati Bengals with these Orange and Black Pudding Shots

I buy the cups, lids and small spoons at Gordon Food Services.

The pudding shots will stay good in the freezer for months.

Check out my other popular pudding shot receipes.