A Charlotte Royale is an amazing dessert that should be saved for special occasions or knock the socks off everyone at the school cake walk.

Last month I introduced you to The Daring Kitchen and the Daring Baker challenge which I participated in. That challenge was to make Lamingtons which is a kind of snack cake from Australia. So if you are still wondering what the heck is The Daring Kitchen/Bakers here is a little synopsis?

The Daring Kitchen is the home of The Daring Bakers and The Daring Cooks. The premise of both groups is to create one recipe each month, given to us by a monthly host. We all create the same exact recipe and then post about it on our personal blogs on a designated date. 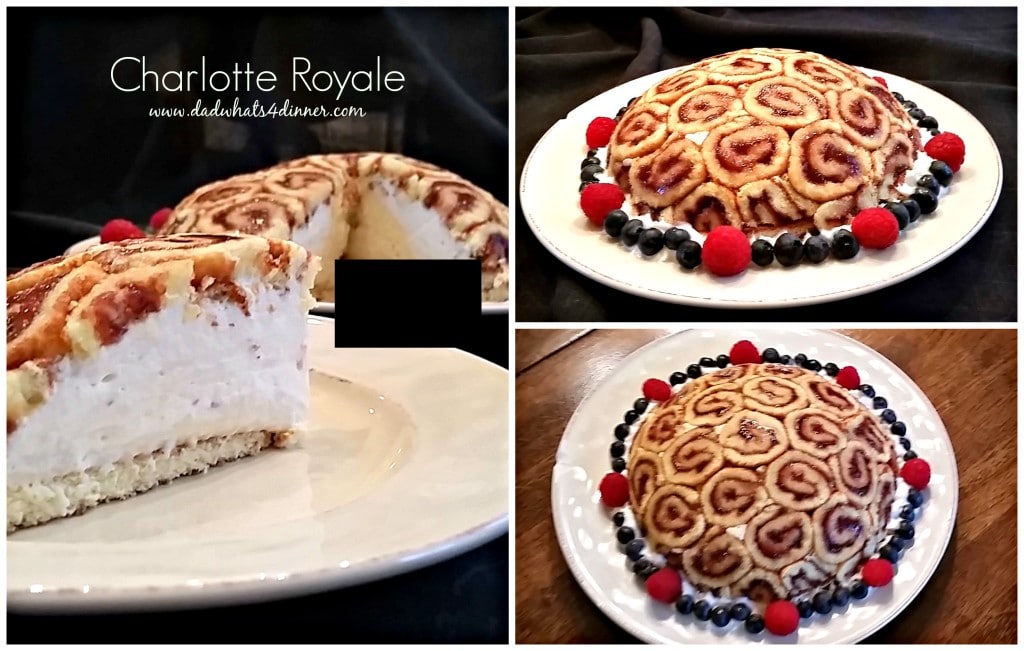 The term Charlotte actually refers to two different types of dish one cold and one hot. For this challenge we are making the chilled variety, which is sometimes referred to as an icebox cake. Chilled Charlottes are composed of a lined bowl or mold, which is then filled with a Bavarian cream or mousse which is firm enough to slice when chilled. The sweet Charlotte molds are typically lined with bread, cake or ladyfingers and the savory ones are lined with vegetables or bread.

The Charlotte Russe is made in a loose bottomed cake pan lined with ladyfingers and is filled with one or more layers of Bavarian Cream or mousse.

The Charlotte Royale is typically made in a round bowl lined with slices of Swiss roll cake for a spiral effect.

Though less common, Charlottes may also be savory.  These Charlottes come in many shapes and are filled with meat or vegetable mousses and the molds are lined with vegetables or bread. 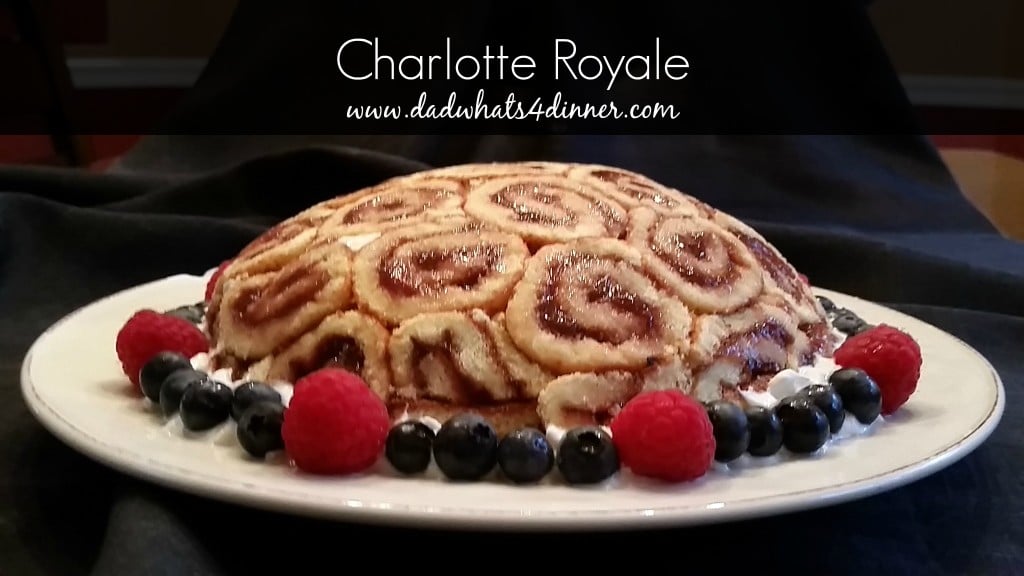 For my challenge I decided to make the Charlotte Royale with raspberry jam filled with raspberry Kirsch Bavarian cream. Since July 4th is this week, here in the States, I decided to add some patriotic themes to my Charlotte by adding raspberries and blueberries. I hope someone gets the irony of this!!!   The Charlotte is a very time consuming and technical dessert to make. As Rebecca warns in her instructions the baker needs to read through the directions many times and make a plan to achieve success. 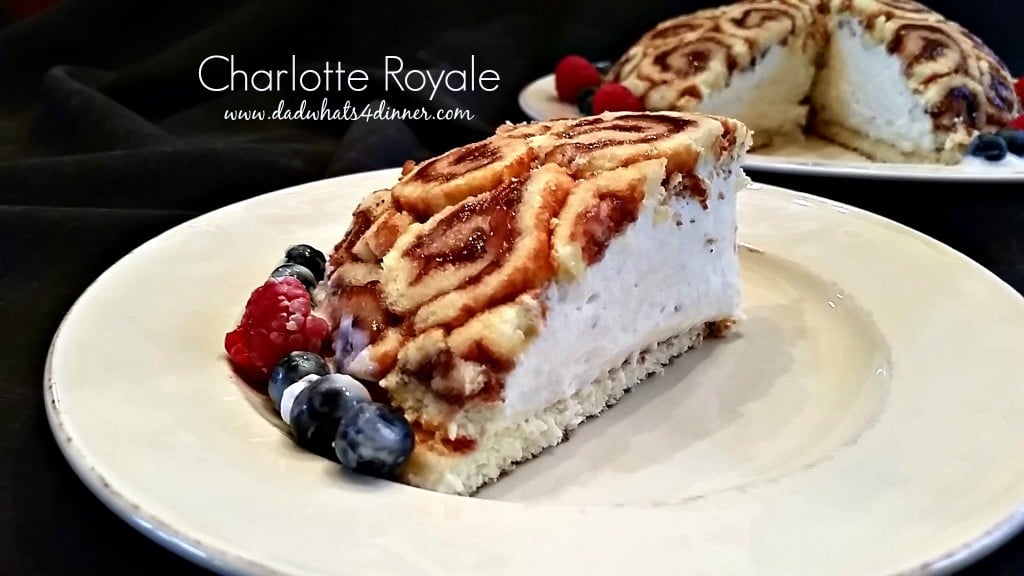 The Charlotte rouse combines two different desserts; the sponge jelly roll and the Bavarian cream filling. By following the directions and making a plan, the only complication I had was when I used too small of a pan to make the sponge cake for the jelly roll. I have four half sheet pans, but for some reason I decided to use my smaller cooking sheet baking pan. Luckily it worked and I still had enough of the sponge to make the bottom layer of the Charlotte and enough jelly roll slices to cover my mold. My family also did not care for the flavor of the Bavarian cream. I liked it but I think the flavor of the Kirsch liqueur was overpowering for them. I believe next time I will use more raspberry jam and vanilla extract instead of the liqueur flavoring in the Bavarian cream. 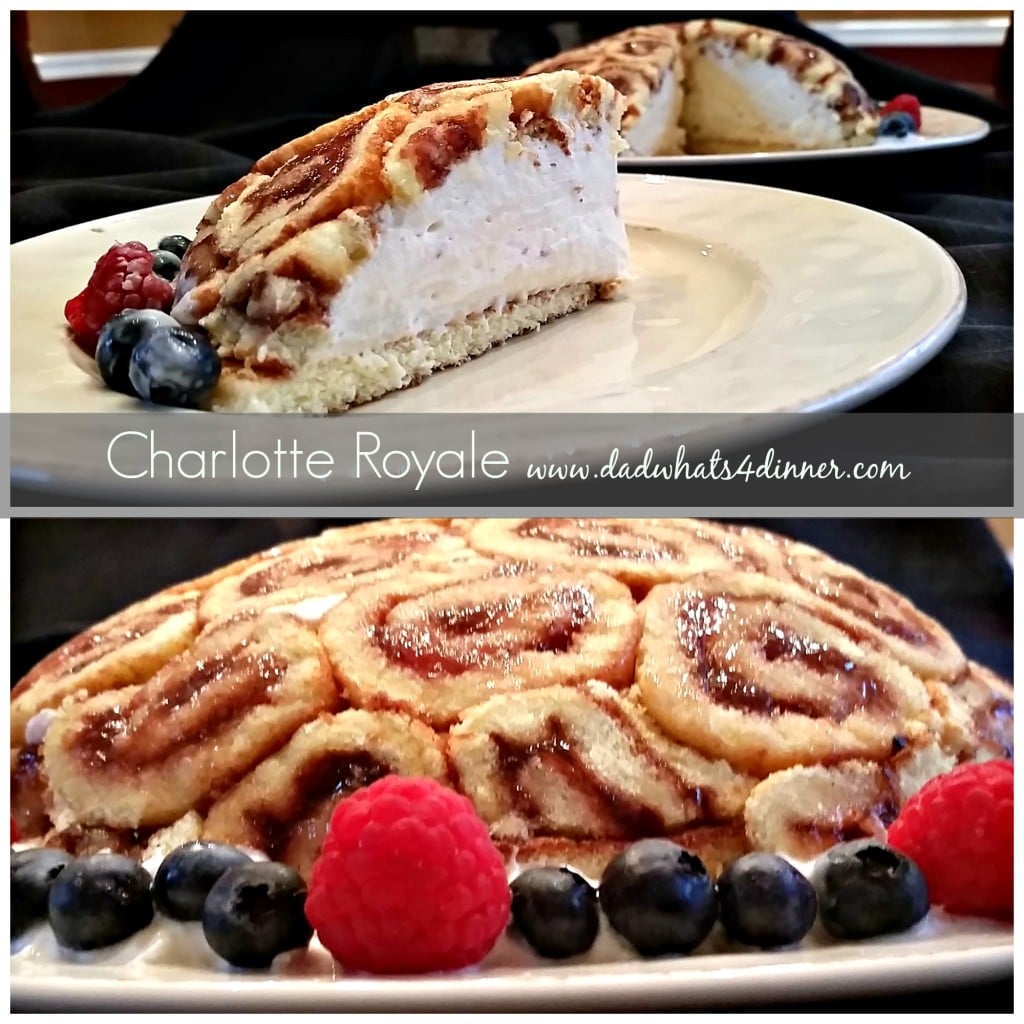 This recipe takes about 2-4 hours of hands on time and plus more for chilling the prepared components. I made my Charlotte over a two day period. The Charlotte can be made ahead and also can be frozen after assembly.

If you like what you see, please sign up to receive all my new recipes via email. I will never sell your information and I will not spam your inbox. I usually send out a newsletter once a week. 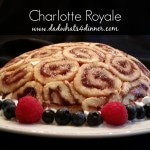 (Recipe adapted from Rebecca from BakeNQuilt.com and The Daring Baker)

Print
Bavarian Cream
A Charlotte Royale is an amazing dessert that should be saved for special occasions or knock the socks off everyone at the school cake walk.
Course: Dessert
Cuisine: African
Author: Quinn Caudill
Ingredients
Instructions
Recipe Notes

Raspberry Bavarian: Use raspberry liqueur in place of the kirsch. After folding in the whipped cream, fold in ½ cup of seedless raspberry jam. If the jam is stiff, you may need to loosen it a bit first with a tablespoon or two of warm water until it’s liquid enough to fold into the cream mixture.

Please join me and bring your recipes and DIY projects to Throwback Thursday’s! with my co-hosts Alli @ Tornadough Alli, Meaghan @ 4 Sons ‘R’ Us and Mollie @ The Frugal Hausfrau